i am trying to build a jigsaw puzzle which has no lid and is missing half of the pieces. i am unable to show you what it will be, but i can show you some of the pieces and why they matter to me. if you are building a different puzzle, it is possible that these pieces won't mean much to you, maybe they won't fit or they won't fit yet. then again, these might just be the pieces you're looking for. this is summing up, please find previous editions here.

No to NoUI, by Timo Arnall

We must abandon invisibility as a goal for interfaces; it’s misleading, unhelpful and ultimately dishonest. It unleashes so much potential for unusable, harmful and frustrating interfaces, and systems that gradually erode users and designers agency. Invisibility might seem an attractive concept at first glance, but it ignores the real, thorny, difficult issues of designing and using complex interfaces and systems.

when was the last time you visited a website, used an app or a device and just couldn't find a way to do what you wanted? it seems to me that we're always optimizing for design, but seldom for the actual user. a user interface is about machines helping us, instead of us adapting to machines.

How to Use a MAGAZINE, by Khoi Vinh 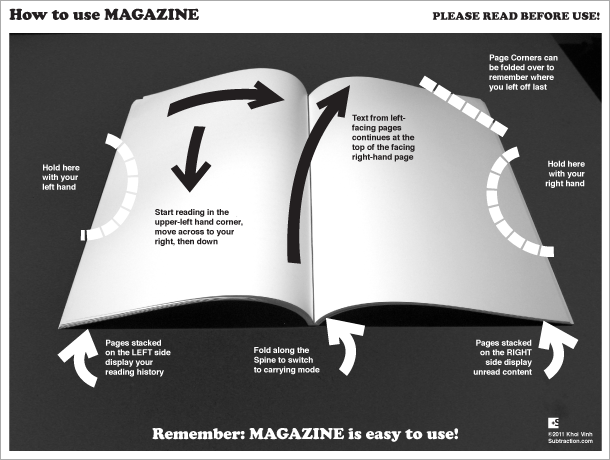 a tongue-in-cheek parody of the concept of instructional screens of apps. it's funny as we don't need instructions to use a magazine. but it also shows how complex they are if we see them as interfaces, as there's a lot of learned conventions going on here. everything is learned however, and we constantly have to make assumptions on what our audience knows and has already learnt.

In Search of Tomorrow, by Chris Granger

The craziest realization for me has been that if we took a step back and stop thinking about programming for a moment, we managed to come up with a thing that doesn't look like programming anymore. It's just asking questions and formatting results. And that encompasses all of the things we wanna do. That is an amazing result to me.

I'm not saying we've done it and I have no idea what programming is gonna look like in 10 years. But my hope is that whatever programming does look like, that it looks nothing like the programming we have now. The last thing I want is you guys who are trying to cure cancer or trying to understand the cosmos or whatever you're doing have to worry about these ridiculous things that have nothing to do with the amazing stuff you're trying to do. I don't want to look like that at all.

Because at the end of the day, the real goal here is a thinking tool and that is what we have to get back to.

a talk on the progress of experiments to make programming easier and more accessible. after all, we don't need to program our computers, we need a way to solve our problems and augment our capabilities. programming is not a tool for building apps or websites, it is a tool to think with. and the more accessible it becomes, the better for humanity.