the deadlines are approaching fast and as always we want to do everything in the last few moments. in this case its a bit different, there were a lot of ideas and patches travelling around. but at the end, we do not have many new features in cheese. bad? probably not, because at least in my opinion we will be able to provide a rock stable release, which works like a german tank.

therefore i want to announce the first official glorious, amazing, international, extremly difficult, adventorous, cheese bug hunting competiton (short: gai eda competition. please do not confuse it with some transvestite)
right now, cheese has about 40 open bugs. to have that german tank release we want to have 0 open bugs when releasing cheese 2.24. sounds great, not? the rules are simple:

while having this great competition i encourage everybody to tell us issues, enhancements and ideas, which should be fixed before 2.24 and open some new bug reports for those issues. but please remember, that we will not add any new feature to the 2.24 version. of course new features can go into 2.26 and we want to accept those things too.

my two slav.. ehm soc students are working hard in the mean time to get their projects finished.

filippo already has done an awesome work already, i totally love the effects the created in the last weeks. right now he is busy polishing the gst-gl plugins, which we can (and _must_) use in 2.26. they then will provide a release, which every gstreamer based application can use easily. sounds awesome, not? if you have any more ideas about great effects, please bug him about your idea as he seems already bored ;)

in the meantime felix was working on the internals of cheese and made it dbus capable. he wants to add it then to cosimos mediamanager library, which will expose cool features to the gtkfilechooser. a user then could say "hey i want to add a photo of my as a buddy icon in empathy" and he just opens the gtkfilechooser and then clicks on the cheese icon. everything else will go automatically, awesome, not? ;)

so guys, keep up the amazing work!

by the way: while reading the ct magazine, i discovered a cheese screenshot in one of the articles. it doesnt feature any text about cheese, but its great publicity anyway ;) you can find it at page 42 in the newest edition. 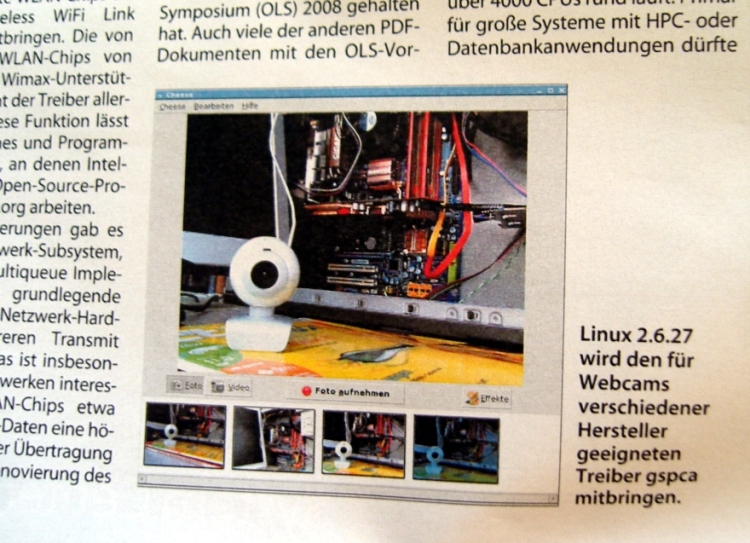